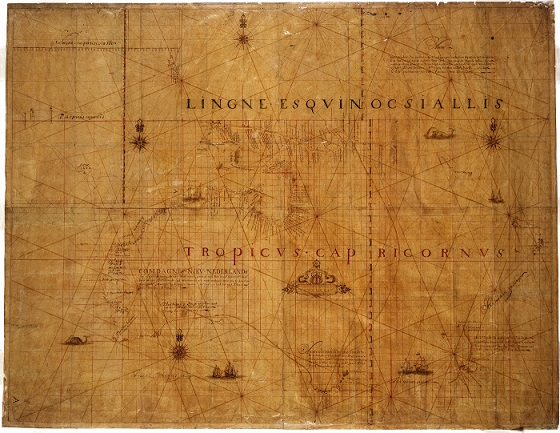 The map combines the results of Tasman's first (1642-43) and second (1644) voyages with those of earlier Dutch navigators. It shows a surprisingly accurate general outline of Australia.

Princess George of Greece presented the original Tasman Map to the Library in 1931. The origins of the map are uncertain. Once thought to have been drawn under Tasman's personal supervision - possibly by his chief pilot, Franz Jabobszoon Visscher - it now seems likely that the map was created c. 1695, derived from an imperfect original map, itself compiled in 1644 from authentic original maps, including those of Tasman's two voyages.

In recognition of the Tasman Map's significance, a marble mosaic reproduction forms part of the floor of the Mitchell Wing vestibule at the State Library of New South Wales.

It would take until the 18th century before this mysterious continent was finally located, charted and later named Australia. Explore the State Library's incredible maps, journals, drawings and books to understand how the pieces of our continent were gradually put together.

Voyages of Discovery - the Great South Land is made possible through a partnership with the Bruce & Joy Reid Foundation.

This selection from Sir William Dixson's wonderful map collection reflects his interest in early navigation, geography and the European exploration and settlement of the Pacific, in particular Australia.

The collection includes examples from the 16th through to the 20th century including hand coloured maps by Dutch mapmakers, Ortelius, Blaeu, de Wit, and Jansson.

Many of the maps are rare manuscript copies, by inland explorers including Sir Thomas Mitchell, Ludwig Leichhardt and Augustus Gregory.

Explorer, surveyor, road-builder and mapmaker, the story of his extraordinary life and work is revealed through the collections of the State Library of NSW.