Like ephemera, posters were not produced with the intention of being collected and preserved by libraries. But posters that once hung on street walls and telegraph poles to proclaim, advertise and protest now have meaning and value far beyond what their creators envisioned. 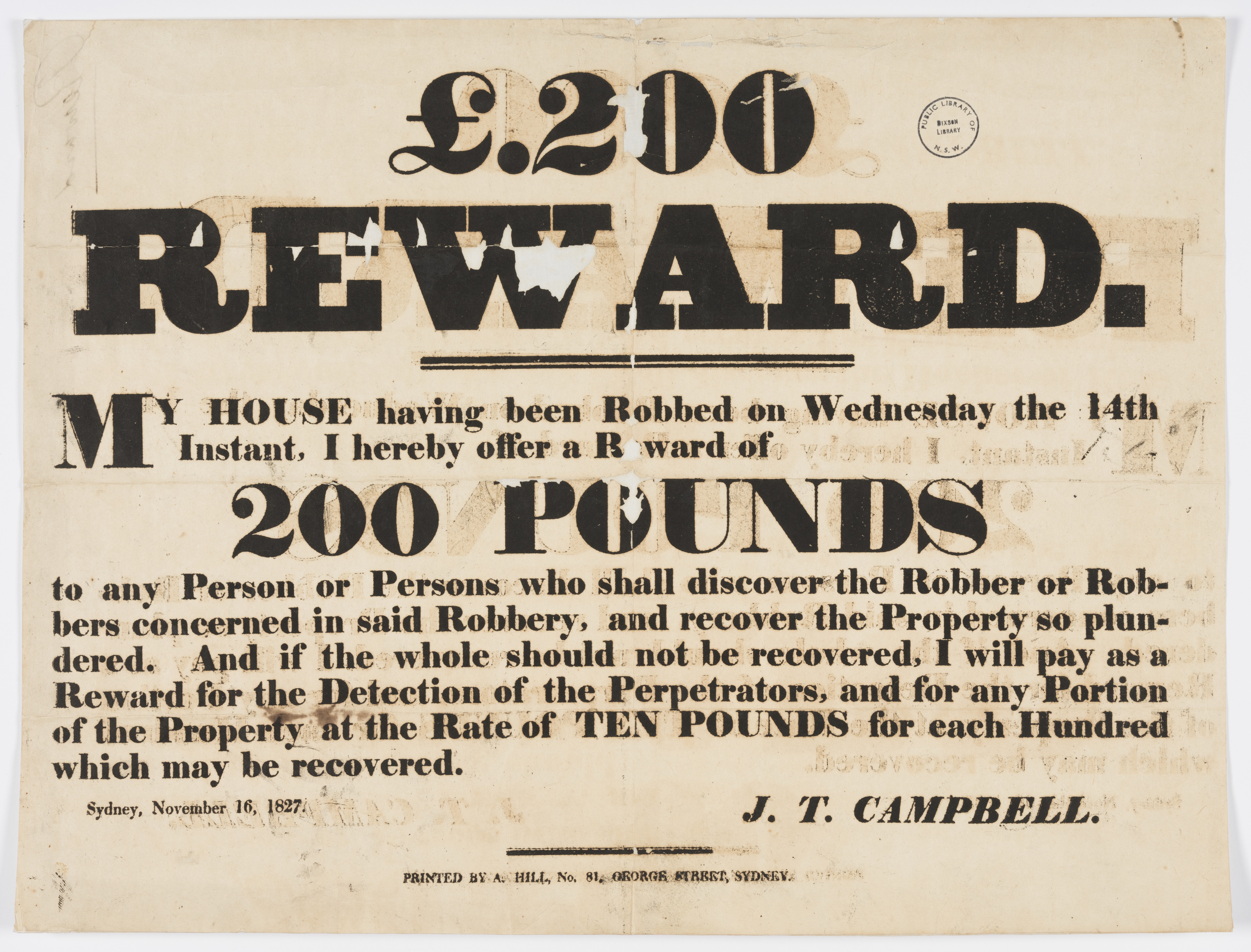 £200 reward: my house having been robbed on Wednesday the 14th instant, I hereby offer a reward of 200 pounds ... / JT Campbell

From the earliest years of the colony, posters have been used as a means of communication. The oldest surviving printed item in the country is a playbill that would have once adorned the streets of early colonial Sydney — it advertises a performance of The Tragedy of Jane Shore to be performed at the Sydney Theatre on 30 July 1796. That bill is held by the National Library of Australia, but a similar playbill, for a performance in 1800 at the same venue is one of the earliest items in the State Library of NSW collection to be printed in Australia.

The golden age of posters

Posters in those years were primarily textual, but this began to change with the introduction of the lithograph to Australia in 1826, by English artist Augustus Earle. This printing technique proved ideal for poster production, and the end of the century saw the birth of the modern poster in France with the iconic posters of Pierre Toulouse-Lautrec and fellow artists of La Belle Epoque. 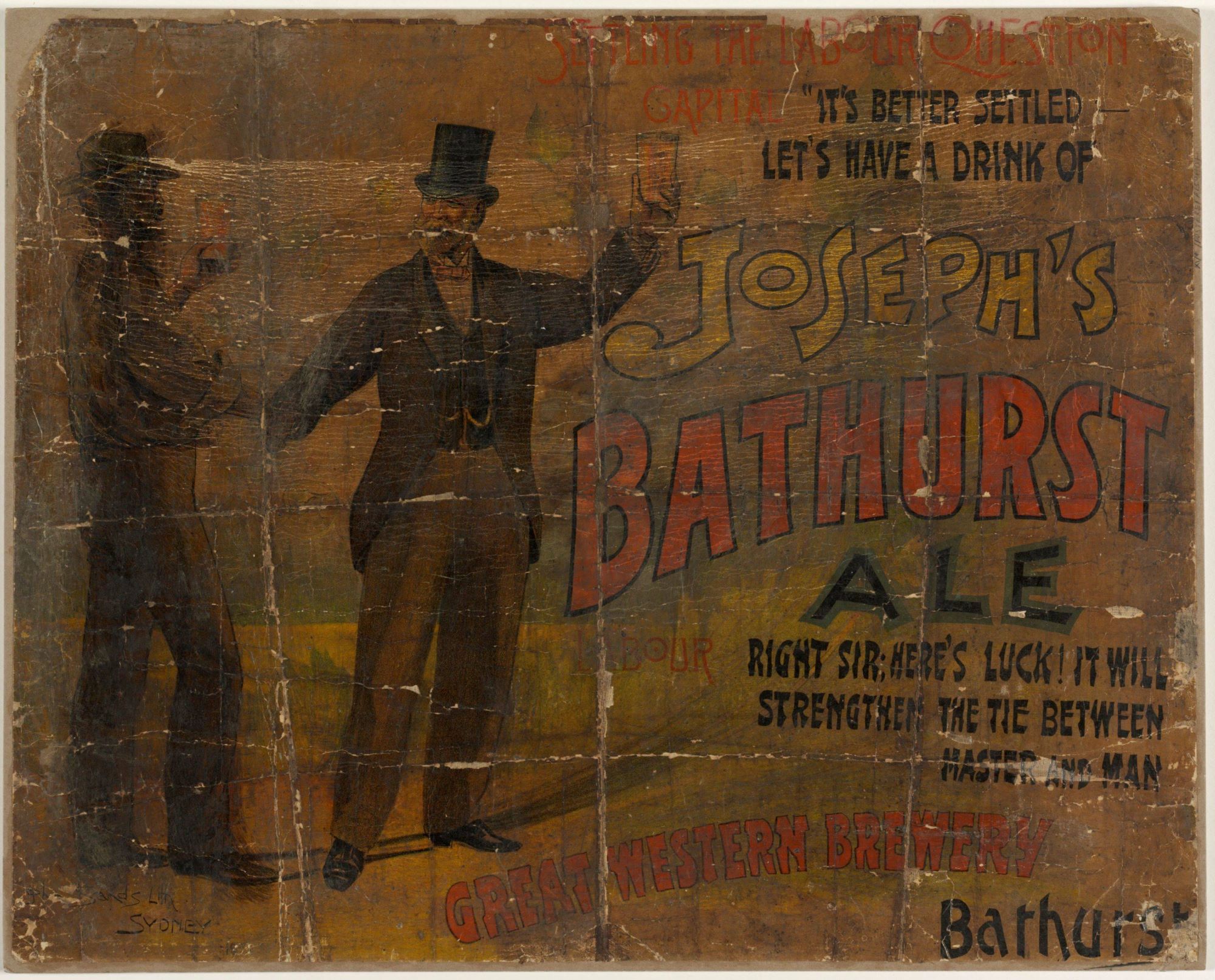 Australia experienced a similar renaissance, with copies of posters advertising beer brands in the late 19th and early 20th centuries still colouring pubs and pool rooms around the country today. The Library’s poster collection includes a large number of World War I enlistment posters, which proved a vital tool of propaganda both here and overseas. Later in the century posters began to be used for protest. The Library’s 2019 exhibition Sedition: A political poster dilemma showcased some of the incendiary underground poster art in our collection.

The Library’s sports posters provide a revealing snapshot of sporting culture at different points in time. Early examples simply outline the rules of a game, or advertise upcoming events. Later sports posters depict individual athletes or sporting teams, and the collection even includes a replica copy of Steve Waugh’s famous red rag, issued by The Daily Telegraph in January 2004 to commemorate his last Test match, against India at the Sydney Cricket Ground.

Our posters collection also highlights the social tensions created by the business of sport and its persistent links to gambling, cigarette and alcohol sponsorship. One sports poster in the collection was produced by the protest collective B.U.G.A. U.P. (Billboard Utilising Graffitists Against Unhealthy Promotions). Titled ‘Winfailed Cup’, the poster satirises the long-running, lucrative sponsorship provided by the cigarette brand Winfield to the NSW Rugby League, whose major competition was called ‘The Winfield Cup’ between 1982 and 1995. Featuring a bronzed depiction of two smoking children mounted on a trophy base, the B.U.G.A. U.P. poster plays on the Winfield Cup slogan ‘Making the big game bigger’ to say ‘Making the big boys pushers’. 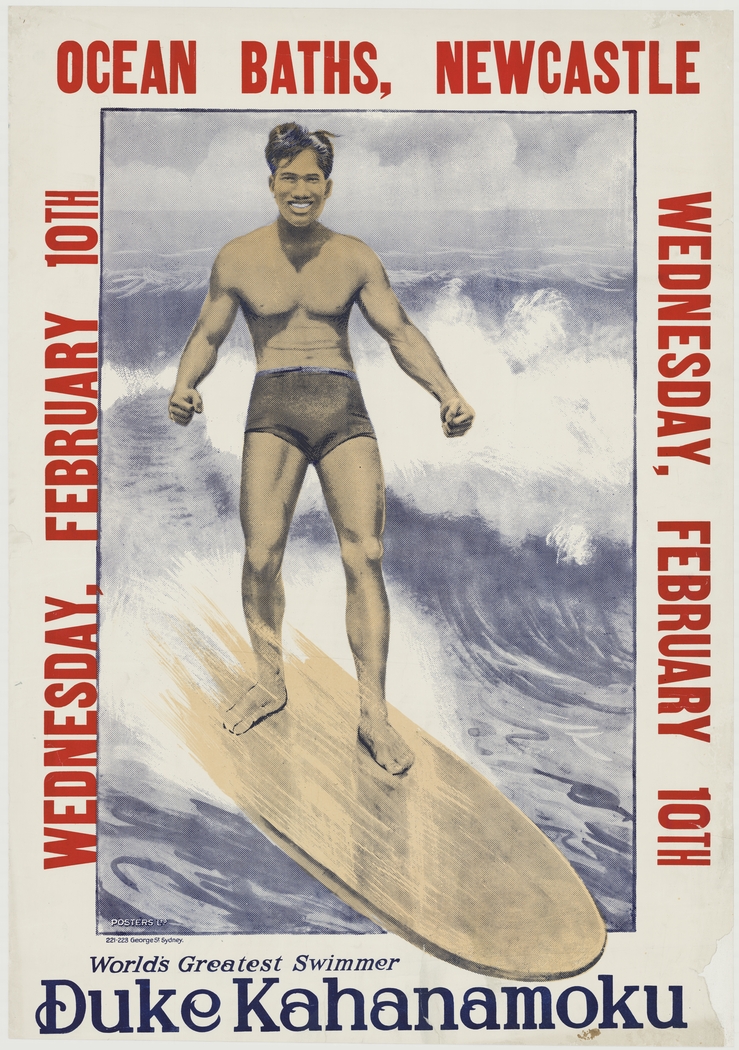 On the morning of Thursday 24 December 1914, onlookers at Freshwater Beach gathered to witness an event that would take on an outsized influence in forever reshaping Australia’s relationship to its coastline.

Duke Kahanamoku, the Hawaiian swimming champion visiting Australia for a series of swimming exhibitions, took to the waves on a surfboard he had handcrafted from locally acquired sugar pine, stunning the crowd with a display that prompted one spectator to exclaim: ‘I'm going to duck into the bush right now to search for a piece of bark.’

The Duke Kahanamoku Memorial Park has been dedicated in his honour, with a surfing statue of The Duke overlooking the Freshwater waves where one morning, a century ago, a national obsession was born.